changers
Заметки
"The Unnatural World" is second studio album by Have a Nice Life. It was released on February 4, 2014, via The Flenser and the band's own record label Enemies List Home Recordings. It is a follow up to 2008's Deathconsciousness and 2010's Time of Land EP.

The tracks "Defenestration Song" and "Burial Society" premiered on December 2013 and January 2014, respectively. The full album was streamed by Pitchfork Media from January 20, 2014 to January 27, 2014.

Andrew Sacher and Wyatt Marshall of BrooklynVegan wrote that "the album falls somewhere between goth, noise, shoegaze and post-punk." They also described the album as "addictively melodic for such dark music."

Noisey Vice stated that the song "Burial Society" had "a Nine Inch Nails-meets-post-punk vibe," which "evidenced Have a Nice Life's leanings on the sonic dark side in the record. Lars Gotrich of NPR described the track "Defenestration Song" as "the kind of pitch-black, post-punk party-rocker that'd really turn up at any Goth Night dance." He also wrote: "A two-note guitar riff is barely heard above the dank din as warming feedback permeates the whole affair, like the kind that lulls you to sleep just before an icy death," while comparing song's rhythm and distorted bass line to the works of the gothic rock pioneers, Bauhaus. 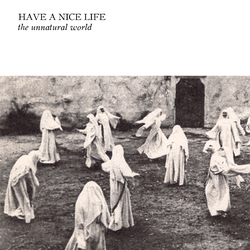 The Unnatural World - Have a Nice Life - Onetwo